APTmpX, developed by WorldCast Systems is the recipient of the RedTech Tribe Top Product Award, presented during the 2021 RedTech Radio Week, organized in collaboration with French publication La Lettre Pro de la Radio. APTmpX is the world’s first and only MPX/composite algorithm to save network bandwidth without deconstructing the original composite signal. With this new technology, FM broadcasters now have access to high quality signal compression for FM MPX/Composite transmission. 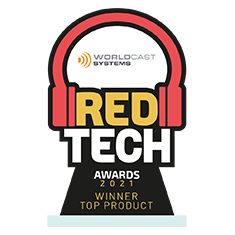 Along with celebrating industry innovation, RedTech’s goal with the awards program is to help support our industry during these challenging times. RedTech is thus donating 10% of award proceeds to Viva for Life in Belgium. Viva for Life is a charity foundation founded in 2013 by French-speaking public broadcaster RTBF, which raises funds mainly for the fight against child poverty in the country.

All award entries will be featured in a special RedTech digital guide, which will be circulated to industry professionals worldwide. Winners will also be covered in the March/April 2021 edition of RedTech magazine.

“We are very proud of all of the winners of this very first RedTech Award program,” said RedTech Award organizers. “The radio and audio industry plays an important part in everyday life at the best of times. It has also proven over the years to be a pillar of foundation during difficult times. It brings people together through information, entertainment, education and more, and these past few months have reinforced its valuable role. Through the RedTech Awards, we honor the manufacturers and service providers who are often behind the scenes, but who very much play a key part in allowing the magic radio and audio to happen and to touch our lives.”

About RedTech Tribe
As an international community for the professional radio and audio industries, RedTech Tribe is built on the philosophy of informing, connecting and exchanging. Our goal is to facilitate business by bringing buyers and sellers together. We connect these global markets at a local level, uniting individuals who work and play in this industry and share the same passion for radio broadcasting and audio — a passion that goes far beyond sound.