Bordeaux-Mérignac - 28th November 2016 -   It’s not unheard of for a Radio station to giveaway a car but not many radio hosts deliver it live to the lucky winner, while broadcasting from the car!  NOVA Entertainment’s “Kate, Tim & Marty” decided to do just that, driving through Sydney’s peak hour traffic while presenting their daily drive show.  In order to achieve this, they utilized SureStream technology on the APT IP CODEC to ensure professional delivery over public mobile internet connections. 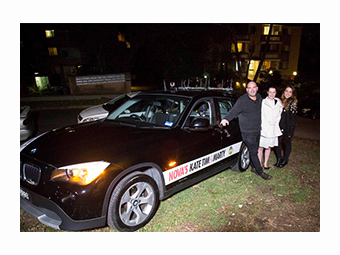 NOVA Entertainment’s Technology Manager, John Pearce, is well used to the unusual requests of the programming team, having recently put together technical solutions to broadcast from the South African Jungle and live from a plane.   For this “in-car” scenario, the most cost-effective and available technology was public, mobile internet. However, the link quality was quite unreliable with many dropped packets and links so John relied on APT SureStream technology to ensure a reliable connection offering high quality audio.

The APT IP Audio Codec in the car was configured to run 6 bi-directional streams through three 4G modems, each connected to a different mobile carrier via six low gain mobile antennas mounted on a roof rack.  These streams were connected back to two separate fibre internet connections at the studio. The engineering team opted to operate mono MPEG4 AAC-ELD algorithm in both directions with a 200ms receive buffer.

After the broadcast was successfully completed, John Pearce commented, “The radio talent broadcast from the car as it drove through peak-hour Sydney traffic for an hour. While there were lots of dropped packets and LOC errors on each individual stream, the reconstructed stream was flawless. Not a single dropped audio packet, while mobile –that’s pretty impressive!”

More info on the IP Codec