Las Vegas, NV- April 24th 2017 -   Having developed and sold a successful line of professional hardware audio processors for a number of years, WorldCast Systems are now rolling their processing knowhow into the well-respected range of Ecreso FM Transmitters as a software feature. 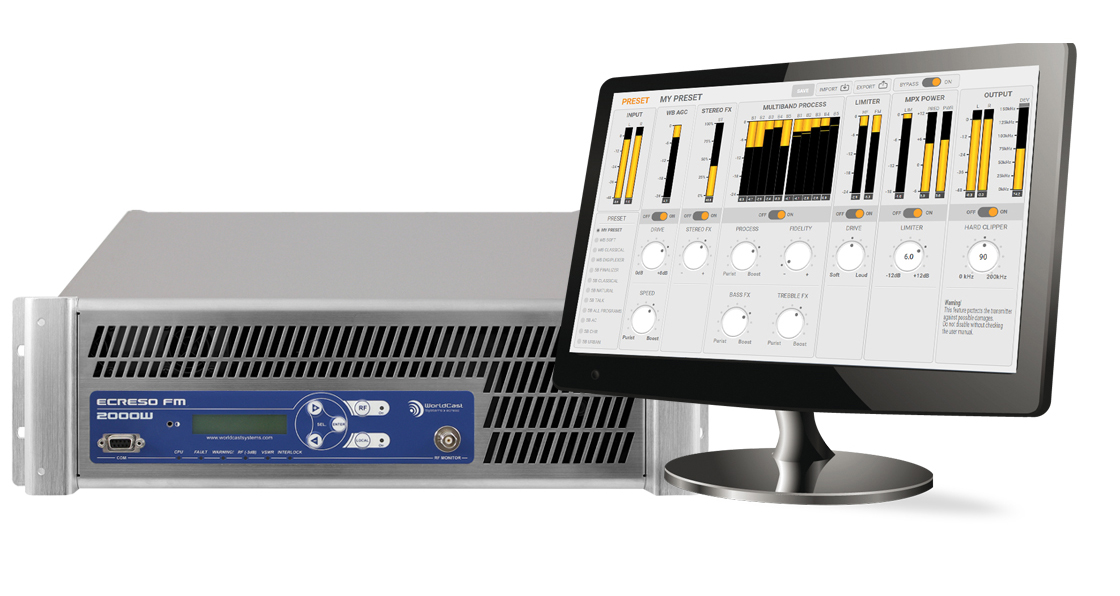 Commenting on the launch of the new feature, Ecreso Product Manager, Gregory Mercier said, “Our integrated audio processor requires no additional hardware which means no additional points of failure in the transmitter system. Competitively, this puts us in a very strong position.”

The fully digital audio processor is hosted within the direct-to-frequency digital modulator of the Ecreso FM transmitter range which ensures that the signal quality is of the highest standard.  The signal is processed from audio to RF in a single digital step which leads to a significant increase in quality.

The audio processor is supplied with a full set of presets for many different formats and requirements ranging from maximum transparency to high loudness and including several “sonic signature” settings. Control is seamlessly integrated with the web interface of the Ecreso Transmitter and designed to ensure ease of adjustment as well as advanced fine-tuning when required.  Vu-meters show the status of the multi-band processor chain at each stage and in real time.

Also included in the new software update is a Scheduler function which, when applied to the audio processor enables the user to schedule specific audio preset changes depending on date and time. This same feature also enables any transmitter setting to be scheduled from program sources to RF power enabling electricity savings during off-peak listening hours.

The new audio processor is available as a software feature on new units and also as an upgrade to the many Ecreso FM transmitters in the field.

The new audio processing feature can be heard on the WorldCast Systems’ booth, N8924 at NAB 2017.