Developed and supplied by: WorldCast Systems, a WorldCast Group company

Main benefits of SFN (by SynchroStream):

The beautiful Coromandel Peninsula is located on the North Island of New Zealand extends 85 kilometres (53 mi) north from the western end. It is 40 kilometres (25 mi) wide at its broadest point.

Almost its entire population lives on the narrow coastal strips fronting the Hauraki Gulf and the Bay of Plenty. In clear weather the peninsula is clearly visible from Auckland, the country's biggest city, 55 kilometres (34 mi) to the west.

The peninsula is steep and hilly and largely covered in bush. The Coromandel Range forms the spine for most of the peninsula, with the highest point at nearly 900 metres (3,000 ft).

The Peninsula has a permanent population of around 30,000 and approximately 60,000 reside in the stations broadcast coverage area. 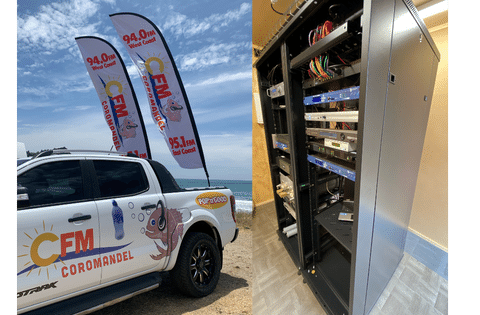 On securing a single FM license in one of the towns on the Peninsula, the challenge for the station owners was how to maximise their investment by extending coverage into other towns across such a rugged area. The main competitor boasted a staggering 12 frequencies to provide coverage in a similar area.

The station has 4 synchronous sites broadcasting on the same frequency. The station established its own Microwave radio network to carry the IP traffic from the first transmission site to the 4 other linked sites.

Station owner John Grant says “the synchronous transmission works well and has become a very popular feature with many listeners commenting on how easy it is to stay tuned to our station that has seamless coverage down one entire coast and across hills on a single frequency. We could not have achieved this without WorldCast APT codecs and Ecreso transmitters”.